Industrial development in the last century has been dominated by the linear model of production and consumption, in which the goods are manufactured from raw materials, sold, used and then discarded as waste.

However, sharp volatility increases across the global economy and increasing signs of resource depletion in the last few years have resulted in a growing push for a new economic model.

These changes have incentivised businesses to explore ways to restore their inputs through reuse and recycle of the products or components. This forms the essence of a circular economy.

What, how, and why

The Ellen MacArthur Foundation defines circular economy as an "industrial system that is restorative or regenerative by intention and design."

It replaces the linear economy concept with restoration; shifts to the use of renewable energy; eliminates the use of toxic chemicals that impair reuse and return to the biosphere; and strives for waste elimination through superior design of materials, products, systems and business models.

In other words, a circular economy model seeks to bridge the gap between production and the natural ecosystems' cycles, on which humans ultimately rely.

The capability to recover the value of materials, labour, energy and capital incorporated in products after each cycle of use is a key motivator for adopting the circular economy, which would not be achievable with conventional produced products (not designed for reverse cycles).

Additionally, if resource prices witness a significant growth in near future, and the costs of establishing the necessary reverse cycle networks drop, the attractiveness of these circular models intensify. As long as these two conditions are actually in place, the time is now appropriate to accelerate the transition to a circular economy on a large scale.

The circular economy concept entails two sets of activities: first, waste elimination through biodegradable waste composting and reusing, remanufacturing, and recycling of transformed and non-biodegradable waste, and second, switching to renewable energy instead of chemical substances.

In a circular economy, no product goes to waste; everything is designed to maximise the value of the materials contained inside it while preserving their high utility at all times. This can be understood better with the help of figure below: 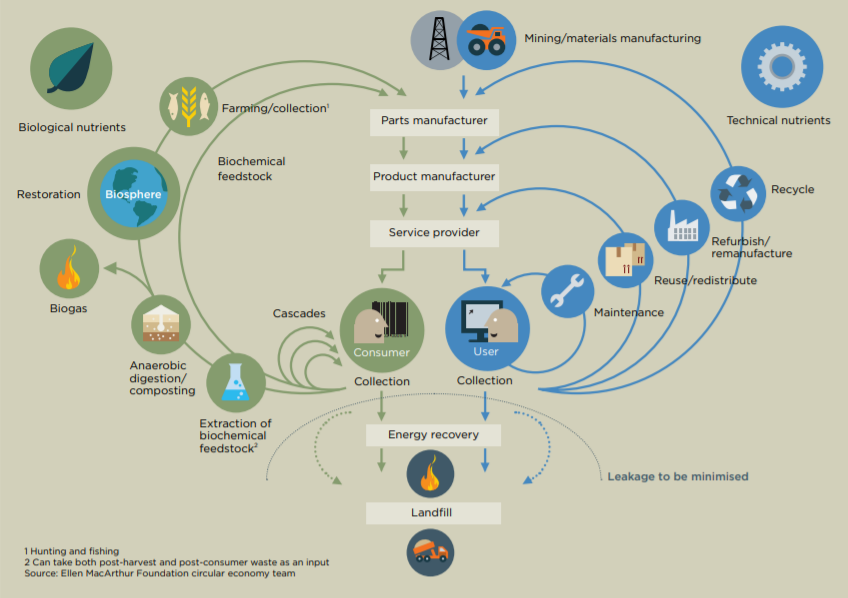 The transition to a circular model is expected to benefit economies in a variety of ways.

The approach would thus shift the economic balance away from energy-intensive materials and primary extraction to create a new sector dedicated to reverse cycle activities.

The emerging market economies in particular will have the opportunity to dive straight into establishing circular setups when developing their manufacturing-based sectors because they are not as ‘restricted’ as advanced economies.

Furthermore, since many emerging market economies are more material intensive than the developed economies, circular business models could result in even greater relative savings.

Circular economy ideals (reuse, re-purpose, and recycling) have been prevalent and practiced in Indian society for a long time, passed down as lessons from generation to generation, making a strong case for India to transition to a circular economy. Doing so will not only reduce resource dependency but also increase competitiveness.

According to the Ellen MacArthur Foundation, a circular economic development path in India could generate a yearly value of $218 billion in 2030 and $624 billion in 2050, as compared to the existing development scenario.

These cost savings could amount to 11% of current Indian GDP in 2030 and 30% in 2050. Adopting the strategy would also help businesses save expenditure on materials by improving product design, developing new business models, and utilising reverse logistics.

Furthermore, compared to the current scenario, greenhouse gas (GHG) emissions might be 23% lower in 2030 and 44% lower in 2050. Other negative externalities, such as those caused by the linear use of raw materials and water, as well as the use of synthetic fertilizers would be reduced. On the circular growth path, the cost of delivering the promised services to each citizen would be far lower than on the current path, increasing disposable income.

Finally, because India is well-known for its IT sector, it is well-positioned to capitalise on the prospects for value creation provided by the interaction of the circular economy and digital technology.

Three key sectors of Indian economy that provide significant prospects for a circular economy transition are:

Cities and construction: India is urbanising at an unprecedented rate against a background of resource constraints. According to the recent estimates, there exists a necessity to construct an estimated 700-900 million square meters of additional commercial and residential space a year to meet this increasing demand.

In this scenario, employing renewable and recycled resources as well as modular construction technologies will effectively reduce waste and construction costs.  Furthermore, circular economy ideas might be integrated into the infrastructure required to provide water, sanitation, and waste disposal services on a large scale.

Food and agriculture: The agriculture sector employs half of the country's workforce and is crucial to food security. By using the existing farm system, India has the opportunity to develop large-scale networks of farmers that are interconnected and symbiotic in their operations and devoted to regenerative approaches.

In addition, combining local knowledge and traditional methods with modern technology holds potential to increase production while substantially lowering the use of resources like water, synthetic fertilizers, and pesticides. This will ultimately result in making the Indian food system even more efficient.

Mobility and vehicle manufacturing: Personal mobility in India is expected to double, if not triple, by 2030, overtaking China and the United States as the world's third largest market. Therefore, the circular economy strategy can aid in the development of a mobility system that serves the growing needs of its citizens, particularly in cities, while reducing negative externalities such as GHG emissions, traffic congestion, and pollution.

Furthermore, many parts of circularity are deeply embedded in people's habits, as seen by high rates of vehicle utilisation and maintenance, as well as distributed post-use material recovery and recycling. These, albeit informal, activities provide a source of income to some of India's poorest sections.

Despite the efforts of governments, businesses, and other stakeholders to align their activities with circular economy concepts, the consequences have been underwhelming. In reality, we are actually dealing with an enormously growing waste problem. This is because most efforts are made at the very end of value chains, resulting in sub-optimal economic and environmental outcomes as well as health risks for people involved.

Furthermore, as the Indian economy and middle class expand, these practices will become less appealing unless a more systematic plan is implemented to modernise and move them up the value ladder.

Finally, as India becomes more linked with the global market and its linear supply chains, economies of scale may drag the country towards the same one-way growth model that developed economies adopted, limiting the impact of present circular practices and perhaps establishing a linear lock-in.