Mass media is generally used to disseminate information through various modes of communication. It helps in the exchange of ideas and information to large segments of society. Broadcast is a field of mass communication that transmits information, imparts knowledge and helps in creating a dialogue between the news agency and the audience via mediums like radio and television. The term ‘broadcast’ refers to visual or audio content dispersion to the people through electronic communication in a one-to-many module.

Radio as a Mass Medium

Known as the ‘theatre of mind’, radio is the most pervasive, accessible and affordable mass media available in the developing world. It networks developing programmes to diverse populations and connects them all on the national and international levels. It is a cheap alternative to the glamourous mediums that have evolved with technology. The radio still remains a potential driver of information and entertainment to highly targeted audiences such as the rural population. Especially in a developing country, like India, this plays a major role in spreading information because most of the rural population is generally left bereft of the newer mechanisms.

The objective of the first radio program in India which was transmitted by the Madras Presidency Radio Club (MPRC) and led by C V Krishnaswami Cheti, was to stimulate interest, inform and instruct the public, and to foster the study of radio communications in the presidency. With the approval being given for the privatisation of radio media organisations by the British colonial government, the Indian Broadcasting Company set up radio stations in Calcutta and Bombay. In 1936, this corporation was renamed All India Radio (AIR), and when India became independent in 1947, AIR became a separate department under the Ministry of Information and Broadcasting. Presently, radio broadcasting gets coverage in 24 languages and 146 dialects all across India. 111 million households own a radio set in the country. Regional radio has reached all states individually, catering to its colloquial audience. 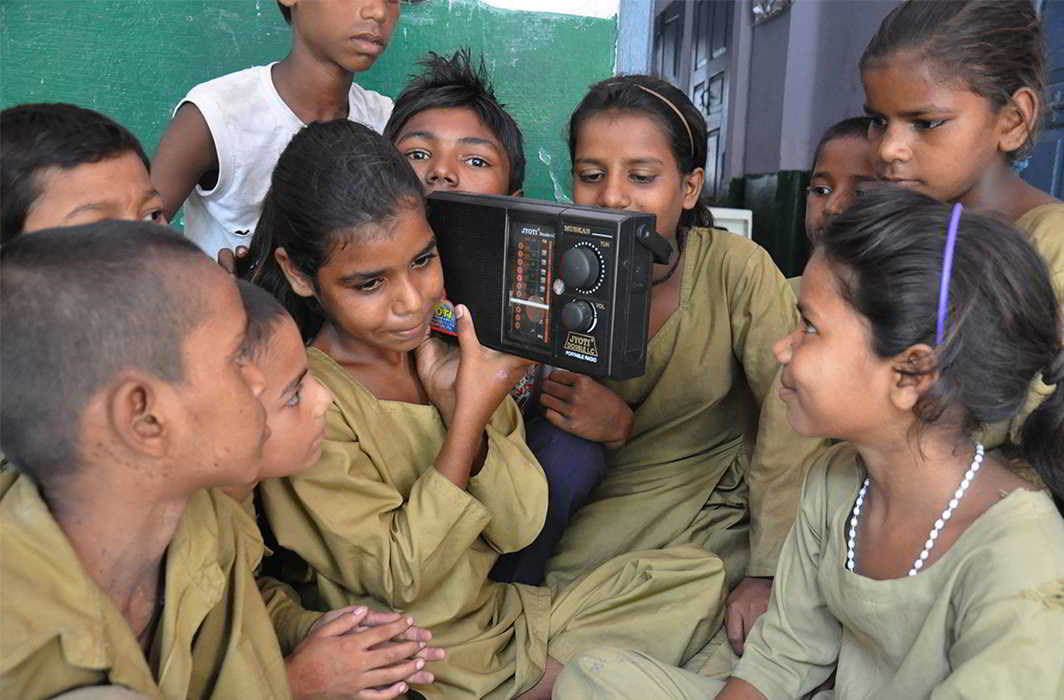 Community Radio stations are popular among all age groups and used extensively to spread awareness.

It refers to a type of radio service that caters to the interests of a particular person in an area. The primary focus is on the local population and issues concerning them. Use of broadcast here acts as a link between the community problems and the authorities who can do something about the resolution of the same. Community radio is a broadcast tool that is of the people, by the people and for the people. It is a decentralised use of the larger medium of communication, that is, the radio. It is important to talk about community radio in today’s times as it provides a platform to the local people to become citizen journalists and educate themselves and their fellow beings. While FM Radio caters to the urban population mostly, community radio’s target audience includes rural, urban, suburban, regional and sectional communities.

Radio Udaan is an example of community radio. Launched in 2014, it is an online radio station developed by and for specially-abled people.  It is the only type of radio station that is run by visually challenged people and is widely listened to in more than 115 countries. The vision of the radio station is broad and its agendas are diverse, which is- “To entertain, empower and elevate the listeners. Radio Udaan aims to reach out to maximum possible people. It wants to become not only a supplier of entertainment and knowledge to the listeners but also a part of their daily routine, family and lifestyle. The station seeks to shoulder the burdens of its listeners by empowering them and listening to their stories and problems, and eventually catering them solutions.”

Apno Radio, 90.4 MHz, Rajasthan was launched in 2005 and is Rajasthan’s first community radio station. The station’s objective is to promote self-reliance and women's empowerment. It focuses on several social issues ailing the rural communities of the state such as education, health, nutrition, environment, agriculture, depicting folk, art, culture, rural and community development.

While the millennials in urban life devote their maximum time to Apple Music and Spotify, this question often pops up with “yes” as an answer to it. However, that is not true. Radio is not dying but rather it is evolving. The term ‘Tradigital’ (traditional plus digital) is assigned to this evolution wherein traditional radio stations are using digital media platforms for two reasons - one, to expand their audience reach and two, to keep up with the technology and not let the broadcasting medium which has a reach of over 100 million people in India die because of the takeover by bigger and international online streaming platforms, television and satellite revolution. The newer versions of mass communications generally caters to a literate population with access to higher-end devices and it must be acknowledged that radio initially started to educate the uneducated and still plays a pivotal role in doing this duty as a medium of communication. Recognition of local broadcasting is crucial to its development and as we talk more about ‘Communication as a Development Source’ in the 21st century, community reach can boost the country’s process to achieve 2030 Sustainable Development Goals by imparting knowledge in a decentralised manner to the regional sections. Moreover, radio acts as a tool for both development and freedom which provides a platform for people to exercise their freedom of speech and expression, uphold the liberty of thought, especially with the growth of community radio.

To understand this better, I would like to connect this with a media theory called the Knowledge Gap Theory of 1970. It is the brainchild of Philip J Tichenor, George A Donohue and Clarice N Olien. They explained the Knowledge Gap theory as “the infusion of mass media information into a social system where higher socioeconomic status segments tend to acquire this information faster than lower socioeconomic status population segments. Hence the gap between the two tends to increase rather than decrease.” In 2020, these faster modes of communication can be through the accessibility of various sources of information. The availability of these mediums come with a price tag and not everyone can afford it. Radio and especially the growing community radio has revolutionised news delivery in various parts of the country that do not get the proper mainstream coverage in the primetime and are highly underrepresented and neglected in the little coverage that they receive. The only way to connect to the grassroots is by reducing this knowledge gap with a tool of communication. This is where the power of radio lies, in the heart of the community people who use this broadcasting medium to connect and embrace positive change in their society. A boost to a media platform which caters to the lower rungs of the socio-economic ladder is necessary in these times when inequality and unemployment are raging and the youth is being fed with narratives filled with hatred and bigotry. This medium can be the harbinger of change in the society for the better, we just have to care enough about the people left behind to dedicate ourselves to such discourse.

Do People Still Listen to Radio in 2020?: A Decentralised Understanding of Radio Broadcasting in India
Share this