The coronavirus outbreak has plunged the entire globe into a deep ‘shock’ with simultaneous disruptions to both the demand and supply side in a highly interdependent and interconnected world economy. The increased incidence of infections has led to a large reduction in labour supply and the initial period of lockdowns have led to a loss of income for several households. Yet, there has been one section of people that have been worst hit by the pandemic - ‘the poor’.

It is a general view that crises and pandemics like this often lead to the redistribution of resources among the masses, as the spread of the virus sees no caste, class and gender differences. However, this couldn’t be further away from reality. The COVID-19 has had a uniform impact on the entire world when it comes to the possibilities of being infected, but the social and economic impacts have been the most on the vulnerable sections of the society. In a recent study by the World Bank, “Global extreme poverty is expected to rise in 2020 for the first time in over 20 years. The COVID-19 pandemic is estimated to push an additional 88 million to 115 million people into extreme poverty this year, with the total rising to as many as 150 million by 2021.”

The article is thus an attempt to shed light on how the pandemic transformed into a pandemic of inequality using various arguments.

A comparative analysis of the novel coronavirus and other past epidemics is often made to understand the relationship between the pandemics and inequalities caused across countries. The first example that comes into the mind is that of the 14th century Black Death which suggested that pandemics seem to reduce inequality in the long run. According to various studies conducted, the Black Death re-balanced the population, and available resources led to a useful reorganisation of agrarian production and triggered significant increases in real wages across the European continent. But the pandemics in recent history seem to have defied this theory. If recent episodes of pandemics are included, ranging from plagues to cholera pandemic et al, they fail to prove the substantial reduction in inequality levels. Instead, the levels have been observed to be increasing substantially, coinciding with the occurrence of these events. Therefore the impact of Black Death turns out to be an ‘exception’ in this case.

Before we begin analysing this relationship between a pandemic and inequality, have a look at the rising income trend in the figure given below and keep it in mind. 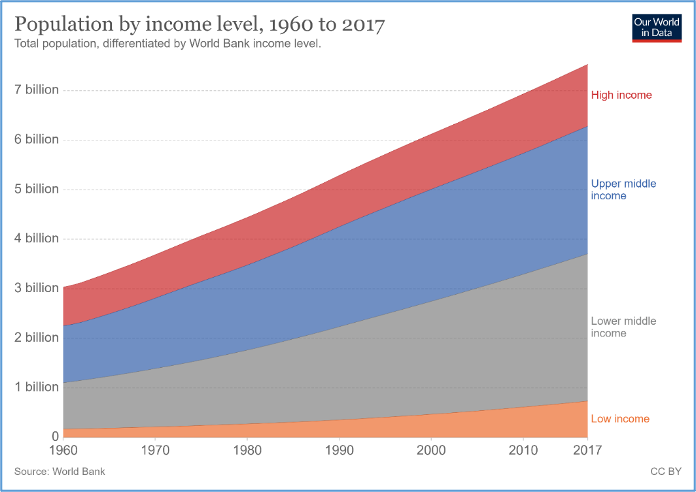 In today’s world, inequality is a pressing concern transforming into a situation of emergency. The figure below visualises the inequality in living conditions between the world’s best-off and worst-off countries. 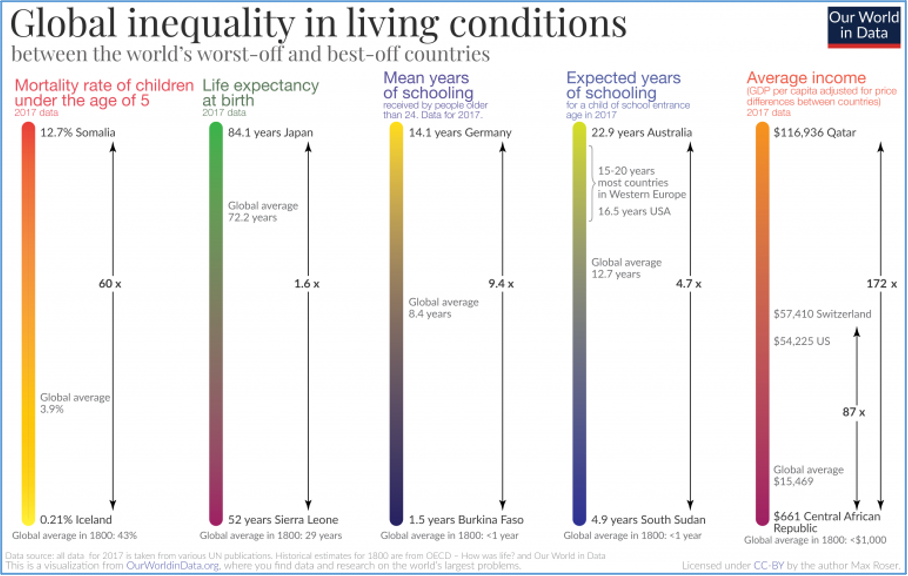 Income and wealth inequality have particularly witnessed an upward trend in all major advanced economies while for the emerging ones, the income distribution trends have been mixed but most of them are experiencing an upward trend too, led by major emerging economies such as China and India. In this scenario, the increase in inequality due to the current pandemic is quite worrisome.

In a study conducted Oxfam, a non-profit operating across the world, it is estimated that there are as much as 121 million more people on the brink of starvation today due to mass unemployment, disruption to food production and supplies. “As many as 12,000 people could die every day from COVID-linked hunger,” stated Oxfam.

In the wake of these figures, it becomes imperative to understand the two-way relationship between pandemics and inequality, i.e. inequality is not just an impact of the pandemic, it is the cause of the outbreak itself.

It is no doubt that it is the extreme socio-economic inequalities and the lack of access to public healthcare facilities that have led to stark ill-proportioned costs being borne by these downtrodden individuals, both in terms of infection incidences as well as the economic well-being. But how exactly does this play out?

To begin with, the countries facing a sustained rise in population levels also experience an increasing population density, which therefore leads to a rise in the ability of the disease to reproduce and spread. At the same time, due to an increase in the labour force, the wages are driven down due to an excess supply of labour. On the other hand, the richer and affluent sections of the society become richer and richer, on account of declining labour wages. These sections are generally the ones having major wealth in the form of capital holdings.

As a result of the stark differences in the income levels, the poor people face a major problem of poverty and undernutrition, the cause of which can be broken down into three aspects: Parental Resources (low awareness and education among the poor, high morbidity), Household Resources (income levels of households) and Community Resources (unavailability of safe drinking water and sanitation). This leads to higher susceptibility to infections making them less capable to fight the pathogens. And when it comes to being tested positive for the virus, these individuals are likely to face higher mortality due to lack of access to public health services. Apart from this, we also observe large scale migration of poor from rural to urban areas in search of employment opportunities, which leads to increased population density in cities and makes them breeding ground for diseases again.

Particularly, the outbreak of novel coronavirus has led to an emergence of the ‘new normal’- work from home (WFH), since it is the only option to continue working and minimising the risk of virus exposure. Even though recent studies have shown an increase in average labour incomes because of this positive shift to work from home, the potential benefit will be highly asymmetrical,  favouring highly-educated and high-paid employees. Also, there are numerous jobs which cannot come under the ambit of this new normal, and individuals in these sectors have been rendered unemployed, worsening the income distribution.

The IMF, in its recent study, has analysed the aggregate decrease in income levels using its GDP growth projections for 2020. It has been found that the estimated effect of COVID-19 will be larger than that caused by the past pandemics and that gains achieved since the global financial crisis (2008) might be reversed. The analysis shows that the average Gini coefficient for emerging markets and developing economies will rise to 42.7, which is comparable to the level in 2008. The impact would be larger for low-income developing countries despite slower progress since 2008. The pandemic could also possibly reduce welfare by about 8% in emerging economies and developing nations with more than 50% change coming from the increase in inequality due to WFH feasibility. 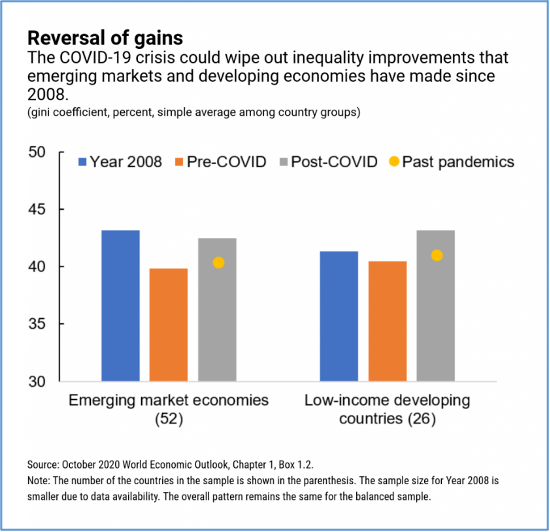 The problems don’t end here. When the vaccines for the virus come out, the market mechanism comes into play to dictate the distribution over and within the countries. The poor countries are very likely to be crowded out of the markets as they receive the vaccines at the very end, as these countries are plagued with poor health infrastructure. Within countries, the most vulnerable sections will find themselves unable to access the necessary medical aid. Even if in the end they are able to administer the vaccine, the damage would have been done. The pathogens might have been rendered ineffective. And therefore, the future generation is bound to face the ripples of the pandemic too.

Another way the generation is doomed is the asymmetries in access to health and education services. With the mode of teaching being shifted online, children belonging to poor households face an amplified barrier to schooling and education.

And lastly, the social inequalities will create ‘avenues for development of unrest and discontentment among the people’ which in the long run leads to political upheavals and the rise of populist leaders.

Thus, the pandemic proves to be perilous to the society in a multitude of ways that go over and above health risks.

The above-mentioned impact is on a global level. Now let’s analyse the impact of the pandemic so far on India, to understand how it is particularly bad.

In August 2020, Mukesh Ambani became the 4th richest person in the world. On the same day, a man reportedly committed suicide and killed his family because of job loss induced by the pandemic. The above case exactly represents the tale of two Indias and how badly this pandemic has affected the already high inequality in the country.

In the last 20 years, the increase in inequality has been the highest in India except Russia. As the rich get richer even amidst a pandemic, nearly 400 million workers are at the cusp of falling into abject poverty, as reported by the International Labour Organisation (ILO).

It is often said that epidemics are true mirrors of society, and the COVID-19 outbreak has effectively mirrored the broken public healthcare system in India. In India, there exists significant inter-state and intra-state disparities. When it comes to distribution of doctors in urban and rural areas, there is a huge skewness observable. In terms of availability of hospital beds, states like Bihar are well below the national average of 0.55 beds in the public sector per 1,000 population while others like West Bengal (2.25 beds/1000) and Sikkim (2.34 beds/1000) have considerably more. The pandemic hit the country at a time when the country was facing an economic slowdown, and the public health crisis of this magnitude is going to have a further negative impact on the Indian economy.

Another aspect of inequality is with respect to gender. With many companies enforcing strict social distancing guidelines and WFH policy, women even with full-time paid employment are facing reduced efficiency because of the additional and disproportionate share of the workload. Additionally, the concerns of rising domestic violence and sexual abuse paints a grim picture of state of women currently.

In the line with the foregoing discussion, the first and foremost task is to secure the livelihoods of the most vulnerable sections of the society. The empowerment and growth of the global community is linked to the socio-economic well-being of each individual. While the impact of the pandemic can never be ascertained 100%, the policy measure taken today will be responsible for the outcomes for the future generations.