The field of journalism is constantly evolving in today’s times. Originating from the medium of print, the news media and the internet have revolutionised it in many ways. The press is no more just a one-way delivery machine of information but it has also encouraged feedback and communication which have led to a change in its style of gathering news.

Photojournalism is a subset of broadcast journalism, referring to the presentation of a news story through photographs. The use of the medium of photography to compliment a news article or fully tell a story on its own has been a major source of authentic information and facts presentation. However, in order to understand the meaning of ‘photojournalism’, it is important to trace the legacy of it and examine the ways in which it was used in the period when we did not have a term to define this type of art. Here is one such early news story that made it to the headlines and grabbed the attention of its target audience by the camera’s capture: 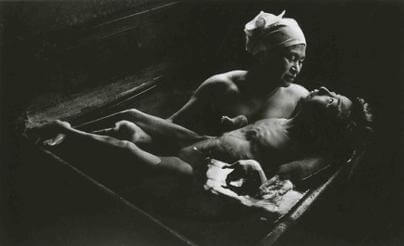 The setup of this photograph is a Japanese, black and white image captured in 1971. American photojournalist W Eugene Smith captured ‘Tomoko Uemura in Her Bath’, a photograph of a mother holding her severely deformed and naked child in a bathroom. The photojournalist wanted to depict the severity of the disease, Minamata, which is caused by mercury poisoning. It was first discovered in Minamata city of Japan, in 1956. Loss of peripheral vision, numbness in body muscles, and damage of speech and hearing are some of the symptoms. In extreme cases, it also affects foetuses in the womb. This was not the only photograph that Smith picked to depict the trauma and condition of the people affected in Japan. He picked several photos that even made it to some of the publications, but he was searching for one striking photograph to gain the attention of the entire world. Smith had a symbolic vision of this photograph in his mind before he actually captured it and turned it into a reality. He explained his idea to Tomoko Uemura’s parents and when they agreed to get their daughter clicked, Smith began working on the set up of the photograph. Tomoko Uemura wanted the photo to depict the reality and plight of the people affected and dying in Minamata because of the pollution. Ryoko Uemura (mother) wanted a sympathetic portrayal of the photograph of her daughter and helped Smith in developing his ideas for the shots. She herself suggested the bathing chamber as the location of the photograph. The final capture was done on a chilly evening in December 1971.

The first publication of the photograph was done in 1972 in the American magazine, Life, as a centrepiece for a short photo essay on Minamata. Smith developed an entire book featuring all his clicks of the disease. This photo became famous globally and shed light on the victims, raising their concerns of compensation. With this attention came rumours that Ryoko Uemura’s family was financially benefiting from all the interviews as the photograph had brought them into the spotlight. This intensified worries that the rumours might have an impact on Tomoko’s mental health. Tomoko died at the age of 21 in 1977. The photograph was withdrawn from publication in 1997, 20 years after Tomoko’s death, as per the wishes of the family. They refused the copyright on the photograph and interviews as well.

Tokomo’s father said “I wanted Tomoko to be laid to rest and this feeling was growing steadily” in a refusal to permit exploitation of his daughter’s photo.

Tokomo’s capture brings to light a lot of aspects involved in the field of photojournalism, both from the reporter’s side and the victim’s side. There is always a story that is carried by an image on a news media platform and there are hundreds of stories behind that one capture. Only a photojournalist is remotely close to knowing them in detail. Photojournalism is a globally recognised and much-appreciated form of journalism today. It is an artistic presentation based on the recognition of realism in stories that are constantly changing and evolving as the audience awaits new concepts of storytelling.

W Eugene Smith’s journey provides us with insights of photojournalism in the western nations, whereas when talking specifically about the Indian context, many consider Kulwant Roy as a pioneer of Indian Photojournalism. He was one of the photographers who captured the birth of independent India and documented the freedom struggle. Digital photography and online editing have been revolutionary evolutions in photography, but realism is what attaches the term journalism and ethics to these captures. This is one of the major reasons why archival photos of Eugene Smith and Kulwant Roy are till date found to be inspirational to many growing photojournalists. It is interesting to see how far the camera’s click can deliver the news to its target audiences and whether or not it will take over the conventional mediums of journalism reporting in the digital era.