The history of the world economy demonstrates a trend of economic shocks emerging in every generation. The World Health Organisation (WHO) declared COVID-19 as a global pandemic on March 11, 2020; and since then, almost every human endeavour has been disrupted.

The impact on the global economy is particularly worrying. We witnessed global supply chains being severely disrupted and strained, financial markets unsettled, resulting in a cross-border economic disaster. Border closures and lockdowns shattered the core sustaining pillars of modern world economies, with the economic shock due to these measures still being weighed across the globe. The ramifications of these disruptions are more far-reaching than anticipated, and the legacies of COVID-19 will shape global growth for years to come.

Even though economies are recovering at different paces throughout the world, the world economy is well on the way to recovery from a slump the likes of which none of its 7.7 billion inhabitants has seen in their lifetimes.

The new paradigms enforced in the COVID-19 era have led to an unprecedented acceleration in automation and digitisation of operations whilst highlighting the importance of upskilling the workforce. Turbulent labour markets provide additional challenges to professionals as the pace of technology adoption remains unabated while automation, in tandem with the COVID-19 recession, is creating a 'double-disruption' scenario for the labour force. There is more inequality between and within countries, and governments are playing a larger role in the lives of citizens.

Looking at historical precedents, the World Economic Forum postulates that the pandemic is about three times as bad as the global financial crisis of 2008 in terms of GDP decline on an annual basis. 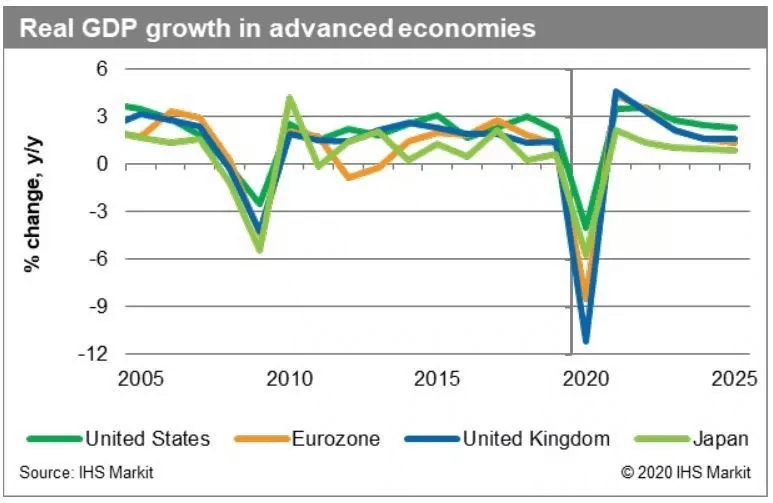 Economists surmise that adopting a circular economy would be the best way for the world's economy to recover, whilst enabling the transition to an essentially low-carbon economy.

The pandemic also catalysed the rise of the digital economy, with the influx of digital behaviour such as remote working and learning, telemedicine, and delivery services. Due to this rapid digitisation, other structural changes can also be anticipated, including regionalisation of supply chains and a further explosion of cross-border data flows.

The future of work has arrived faster, along with its myriad challenges such as worker vulnerability, income polarisation, more gig work, and the need for workers to adapt to occupational transitions multiplied in potential. This acceleration is the result not only of technological advances and recession, but also of new considerations for health and safety, and economies and labour markets will take time to recover.

The quantum of the amplification of these trends and the realities of this crisis have also triggered a reconsideration of several beliefs, with implicit and long-lasting effects on the economy and society and attitudes about efficiency versus resilience, the future of capitalism, densification of economic activity and peoples’ lifestyles.

The pandemic has also accelerated some of the key geopolitical trends that will shape our next world order - de-globalisation and nationalism, for instance, along with debilitating China’s hegemony in the supply chain.

While the quantitative disruptions in the economy, structured finance and credit facilities are quite explicit, the more permanent changes are perhaps the ones considered from humanitarian perspectives. The most prominent qualities that were on display during this time of distress were the adaptability and versatility of people, which caused the cataclysmic shift of buying patterns to the online medium and helped to keep it afloat while intensifying the focus on the triple bottom line.

Over the past two decades, in advancing economies, the onus of security has generally shifted from institutions to individuals. Healthcare systems are being tested and often found wanting, while benefits from paid sick leave to universal basic income are getting reviewed. There is potential for a long-term shift in how institutions offer support, through safety nets, and a more inclusive social contract.

History bears witness that choices made during crises can shape the world for decades to come. What remains critical is the need for collective action to build economies that deliver inclusive economic growth, prosperity, and safety for all.