India’s Jet Airways may have shut down all operations, but they are not the only ones with their international business up in flames due to a financial crisis. The United Nations has been jostling with its latest set of money problems as well.

If you have not been living under a rock for the past couple of weeks, you must have already come across numerous articles like these. 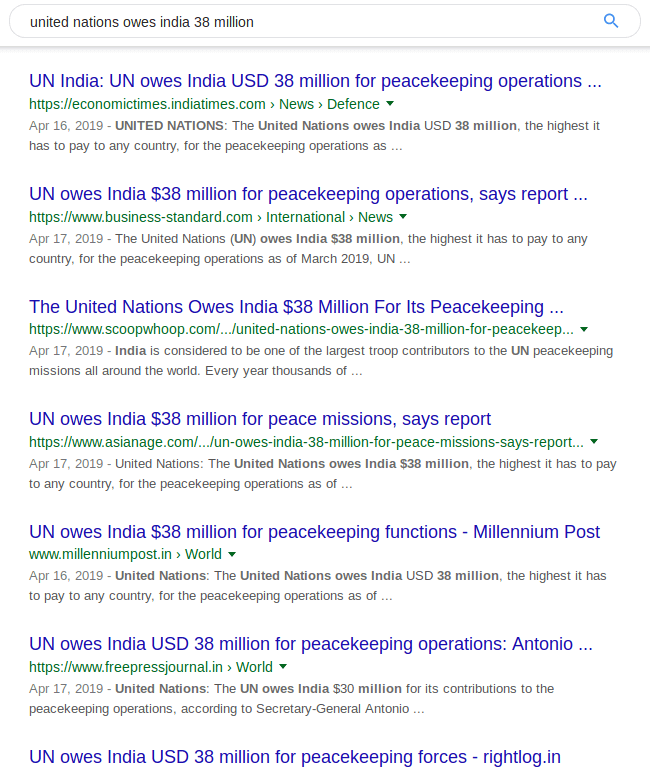 Almost every publication on the Internet that you could think of has been reeling from this news and successfully copy-pasting news from one another. Whichever side you look at, whatever your source is, it does not make a difference. There have been YouTube videos, Facebook posts, TV monologues and private rants about it. The same thing, boxed up and packaged differently, again and again.

“Ok! The United Nations owes India money, lots of money. Now get over it”

The problem with the discussion is that it is pointed in the wrong direction and the whole narrative is messed up. To be honest, the United Nations is not really at fault here. When you have a situation like this, news consumers tend to simplify the news in their terms and react to it in the most primitive way possible: by losing their minds.

Alright, let’s get down to business. The United Nations is under a financial crisis of unusual proportions. It is facing severe shortages in its Regular Budget compensation, as well as its Peacekeeping Budget, which is the main reason why they are finding it tough to repay their dues to the Police-Contributing Countries (PCCs) and Troop-Contributing Countries (TCCs).

As of the beginning of April 2019, the United Nations is yet to complete $256 million in total payments, with the likes of India, Bangladesh, Nepal, Pakistan and Rwanda each being owed $23-38 million.

This situation has a direct link with the state of the United Nations’ cash balance, which has fallen by $735 million since the beginning of the decade. It currently stands at an abysmal -$323 million (yes, the minus sign is a negative balance).

How could such a dangerous cash crunch bite the UN at this point of time? To understand things, we have to get a better understanding of the way the UN gets its money to function. It is a bit complex, but if you know basic maths and possess an above-average attention span, then you will definitely get a grip of it.

So, it works like this. The United Nations decides the amount that each country should pay to the Regular Budget, based on the Gross National Income (GNI) of the respective country.

It then makes a series of adjustments based on the amount of external debt of the country, whether the country has a very low per-capita GNI and if it belongs to the list of Least Developed Countries or not. If so, the contributions by the country will be capped at 0.01% of the total budget. Also, every country must pay at least 0.001% of the budget, called the minimum pay adjustment.

Oh, and lastly, if a country’s share exceeds 22%, it will be brought down to and capped at 22% of the total budget amount. The United States whose estimated share is 23.069% is the only country that is getting a discount, in having to pay only 22%.

Here is a great infographic from Amanda Shendruk of Quartz.com, who sums it up perfectly.