In 2001, Portugal became a global leader in the war against drugs when it decriminalised the possession and consumption of all illegal substances. When this topic comes up in conversation, most people (especially those from the UK and the US) are rather shocked when they find out. Two obvious questions then arise. Firstly, how and why could a traditionally conservative country, tucked away at the edge of Europe, just decriminalise all drugs? The second question is, of course, did it work?

Background to this article

Brendan Hughes – Principal Scientist and expert in Drug Legislation at the European Monitoring Centre for Drugs and Drug Addiction.

João Goulão – Director of SICAD, the government department for Intervention on Addictive Behaviours and Dependencies, and the architect for Portugal’s drug policy.

Portugal’s decision to decriminalise drugs cannot be understood without first looking at the recent history of the country. From 1933 to 1974, Portugal was under the rule of the Estado Novo regime, a right-wing, Catholic, authoritarian government led by Antonio Salazar. If this name sounds familiar, it’s because it was the inspiration behind Salazar Slytherin, as J.K. Rowling used to live and teach in Porto. Portugal was shut off from the outside world, with its only neighbouring country Spain under a similarly restrictive right-wing dictatorship, so Portugal “missed out on the experimentation and mind-expanding culture of the 1960s.”

When the colonial troops came back from Africa, they brought cannabis with them; soon after, heroin entered the country. As João Santa Maria explains, “freedom gave us the right to do whatever we wanted.” However, there would be consequences to this liberty. By the end of the 90s, heroin addiction, HIV and Hepatitis C had ravaged the country. In truth, nobody quite knows how many people were addicted, but it’s estimated that 1 in 10 people were using heroin, 1 in 100 were battling heroin addiction, and HIV rates reached a high of 104.2 new cases per million in 2000. To put that into context, the current HIV rate is 4.2 per million. One of the most important things to understand is that heroin use was not limited to a certain class of people. Bankers, lawyers, doctors, teachers; João Goulão remembers how everybody seemed to know a heroin addict.

Thus, implementing wide-scale change and challenging the social norms of a drug policy was a far more realistic and achievable task in Portugal than it would be in the UK or the US today. Furthermore, the policy was not a result of left-wing liberalisation, as some people might assume. The motivation, as explained, was a response to a health crisis, not an ideological movement. In 2001, the new decriminalisation law was implemented and although there have been some small alterations, it essentially remains the same to this day.

At this point, it is important to address exactly what decriminalisation actually means. Brendan Hughes has made a very useful video (www.youtube.com/watch?v9NKhpujqOXc) which I highly recommend watching. To explain it briefly, decriminalisation is not the same as legalisation. In the diagram below, taken from Hughes’ video, the red dots indicated illegal activity, and the green dots, legal activity. Decriminalisation, or a non-criminal offence, does not pass the line from criminal to legal. It simply becomes an administrative offence, rather than a criminal one. For example, bad parking is not a criminal offence, but may still be fined and punished. The same can be said for the possession and consumption of illegal substances in Portugal. 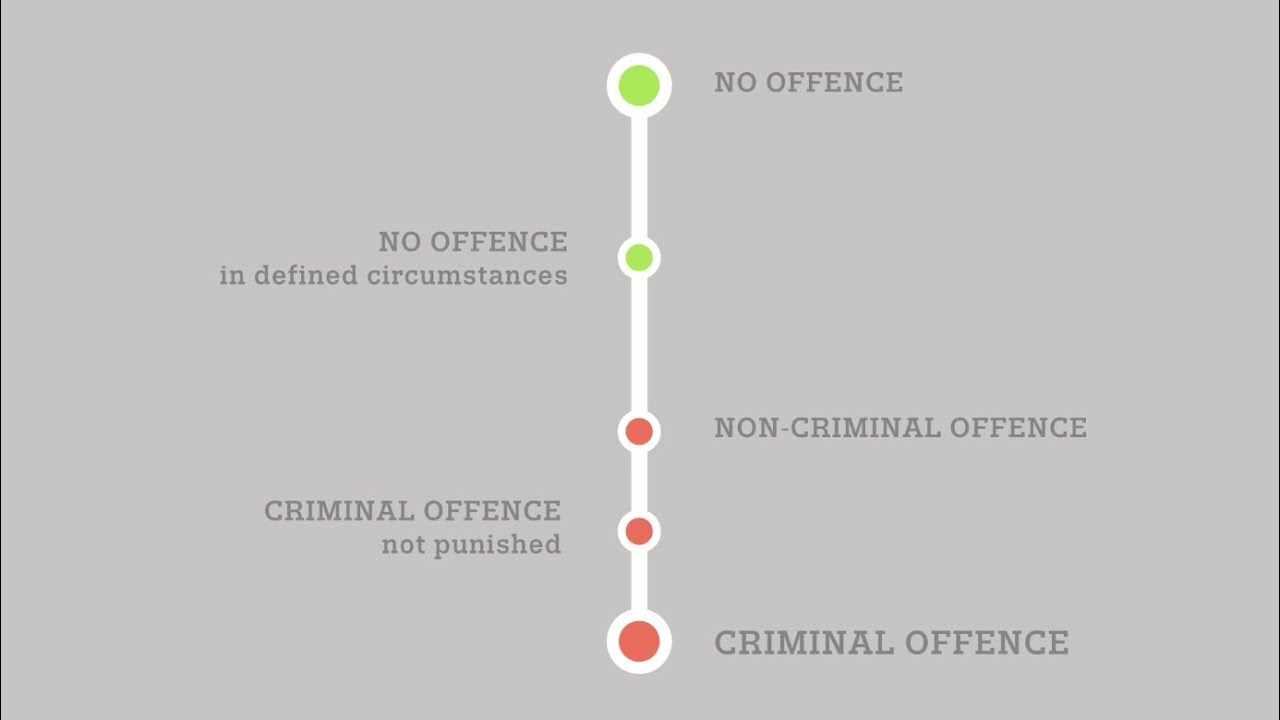 One of the main issues with decriminalisation in Portugal, and across the world, is that the general public does not seem to understand what it entails. In Lisbon, this is not helped by the fact that tourist areas are filled with ‘drug dealers’, who offer unsuspecting tourists cannabis, hashish and cocaine. The drugs are almost always fake (which is why the police do not intervene), but this gives visitors the impression that drugs are legal in Portugal which definitely muddies the water. Another issue is that the concept of decriminalisation has become incredibly and dangerously politicised. Here is an extract from my interview with Brendan, wherein he concisely details the issues with decriminalisation:

Brendan Hughes: “From what I see, a chunk of it is to with this horrible word decriminalisation, which evokes so many feelings in different people, despite the fact that most of them don’t actually know what it is or what it means. They imagine it to mean something, and therefore either they are greatly in favour of what they think it means, or they are greatly against. So, they are in favour because it means people don’t get criminal records, or people get treated and treated as humans, and they have dignity, and you take the drug users away from contact with the police or the criminal justice system. And people are against it because they think that it takes away the threat, and it suggests somehow society considers that this offence isn’t particularly that bad after all and therefore it will encourage a bunch of other people to do it - those are the main arguments. And because neither of them are fully correct - but again, people don’t really seem to talk so much about the facts.”

Me: “And, you know, that decriminalisation doesn’t lead to increased use.”

Brendan Hughes: “It doesn’t. We don’t know! It doesn’t lead to anything predictable.”

Me: “It’s not about liberalisation. And I guess I think some people think that it’s a left-wing policy.”

(Extract from my interview with Brendan Hughes).

Beyond the politics, what have been the quantifiable outcomes of the policy? Well, it is not a simple answer. Statistically speaking, Portugal has dramatically improved. HIV rates have plummeted, overall drug use is down, though Hepatitis C and problem drug use are still an issue. If you are caught with an illegal substance, you are either fined, given a warning, or sent to a commission. These commissions have the mantra of ‘treatment before punishment’, and the vast majority of cases are dismissed. If you are a drug addict, then there is no possibility of a fine, only treatment.

In terms of policing, the local authorities rarely bother anybody on the street, and it is extremely common to smell cannabis at any time of the day. The attitude towards drug addicts has also improved, and heroin-assisted treatment centres, in Lisbon, are finally about to open, having been promised for over two years. The improvements listed above definitely qualify as drastic progress, in comparison to where Portugal was in the 80s and the 90s, yet it would be an oversimplification to credit all of this to decriminalisation. João Goulão has detailed how they could have done the whole policy without decriminalisation, and still put in place the social services and commissions that exist today. In fact, there is definitely a symbolic element to Portuguese decriminalisation; allowing the Portuguese population the freedoms that they had so badly missed for the majority of the 20th century.

Yet, upon speaking to various street teams involved with drug use, homelessness and other issues, I discovered that there is definitely the feeling that the policy did not go far enough; some believe that legalisation and regulation are the only solutions. Financing, from the state and local governments, has dwindled, and drug users still feel punished purely for being drug users. Though people are more accepting, Santa Maria notes that, “although they support our work, they don’t want to deal with it on their own doorstep”. When I asked João Goulão about these complaints, he responded in an empathetic but pragmatic way. It is clear that he cares about how his policy is perceived by those it affects, but being an activist and being a politician are two separate things; in charge of a delicate political balancing act, it is a tricky task to please politicians, the public and drug users all at the same time.

The global trend towards cannabis legalisation is also causing problems. Part of the basis for the entire Portuguese policy is that there is no such thing as ‘hard’ drugs and ‘soft’ drugs; all of them are treated as equal. However, with other countries starting to legalise cannabis, this creates a sticky situation for the Portuguese. It would be very difficult, if not impossible, to justify the legalisation of cannabis; if all drugs are equally ‘good’ or ‘bad’, then if you legalise one, you must legalise them all.

As I stated earlier, it is hard to label the policy in a binary sense of ‘it works’ or ‘it does not work’. That said, I find it difficult not to see the Portuguese policy as progress in the right direction. There are clearly some issues, but these generally take the form of improvements that need to be made, rather than fundamental problems of the policy itself. As more and more countries start to think about and implement similar policies, the Portuguese 2001 legislation is still relevant nearly twenty years later. Whether or not it serves as an example or model for other countries is debatable. Drug policy is very nuanced, and each individual country has its own idiosyncrasies and culture that would affect whether decriminalisation would work. To try and imitate the Portuguese success by replicating them would not work; the policy was reacting to a specific situation at a specific time. However, using the Portuguese as an inspiration of alternative policymaking, and thus reviewing our own beliefs about drug and drug policy could be a way forward. Too often, we follow the dogma that we have been taught by friends, family, politicians, looking for an easy, ‘one size fits all’ answer to the very difficult question of drug policy. The Portuguese have shown us that there is another way, and maybe we should take note.