In recent times, there has been a wave of anger towards companies which use individual data without his or her knowledge. Campaigns like #OwnYourData, #MEGA and most recently, the movie documentary The Great Hack have brought the issue to the limelight.

In this article, I won’t argue that there is no malicious use of personal data, I would like to show that though there are some cases where data is used for ‘nefarious’ -  I quote nefarious because it is subjective to each individual - purposes on a whole, the tool known as data analytics has brought far more benefits than harm to society. Fake news and data analytics are separate tools which though used simultaneously need to be separated. Whilst data analytics is instrumental in the distribution of fake news, it is not the cause of it. Gossiping, fear mongering and rumours have been used long before data analytics even existed. Though I must add that fake news is completely illegal and should never be condoned. Now that I have set the stage, let’s dive right into this hidden world of data analytics. 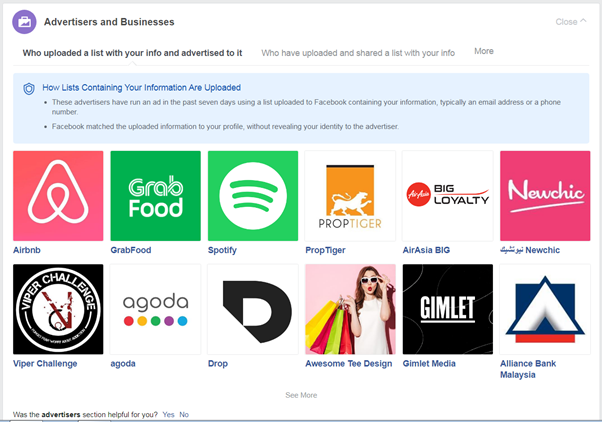 Facebook- A name that triggers a whole array of feelings for everyone. A tool for communicating, connecting and gathering for like-minded people or long-lost friends, or  a tool to gather our personal data, process it and sell it to the highest bidder. Not many of us know that we can ourselves see if Facebook is being ‘mischievous’ with us. Open the ads section under settings to see where your data has been used. So let’s say Spotify received your data from Facebook, based on that, they would be able to provide you with music that will most likely fit your taste. It seems trivial but in this day and age where content is being created at an exponentially increasing rate, it would be impossible to go through everything to find something we like. To put perspective on that, YouTube is estimated to upload 500 hours of content every minute. That essentially means that a lifetime of content is uploaded every 2 days. It may be online shopping, holiday booking, travel planning and they all have one goal… to make our lives easier so we continue using their platforms. In the case of Facebook, we have a friend that ensures that we get the best options to choose from.

Arguably, Spotify, YouTube and Facebook are luxury goods, however this is also prevalent in healthcare. Let’s dive into a hospital to see how data is changing the way we work. Most hospitals, nowadays, have some sort of digital ticketing/queuing system which still requires you to wait for hours for your treatment. With the increased amount of data and software as a Service Business Intelligence (SaaS BI) tool, hospitals will be able to predict the busiest parts of the day and staff accordingly to deal with these peaks. This will allow hospitals to handle more patients more effectively and hence save more lives in the long run. After getting into your appointment, doctors would be able to have a full view of your entire medical history, if it was shared. This will, in turn, allow them to better understand your history which saves time and provides a more accurate diagnosis. These are two very simple examples which only can work effectively when medical data is shared.

A third and less obvious example; what if the medical data was given to insurance companies? The fear is that with access to medical data, we will be charged additionally for all the problems they will find out about. But I argue differently. With more data available using analytical tools, insurance companies would be able to better personalize insurance offers which could actually lead to cheaper premiums due to the removal of unnecessary coverage. On top of that, insurance companies will be able to better reward people for taking steps to maintain good health. Lastly, with access to medical data, insurers will be able to better identify insurance fraud leading to more applicants being able to claim insurance when required. There is always a risk that some companies will implement some unfair practices leading to increased premiums. However, with the growing digital economy and a multitude of options, these companies are likely to be outcompeted in the free market, making them unsustainable in the long run. Whilst this is something that will arise in the future, let’s look at it in a very contemporary context - data analytics in Political Campaigns.

Before diving into the data analytics of campaigning, I want to highlight that a campaign is defined as ‘a planned group of especially political, business, or military activities that are intended to achieve a particular aim.’  In the case of political campaigns, the focus is to convince those who are on the fence to support your party. Long before the infamy of Cambridge Analytica, campaigners have been collecting polling data to decide how to target their campaigns. So why are we suddenly so afraid? Well, mostly it is thanks to our favourite six-inch toy that we never stop playing with. Due to advancements in smartphone technology, we are becoming far more connected to the internet, which in turn leads to more data collected on us. This was the cost of a ‘free’ internet. The free internet came with the major benefit of allowing everyone a chance of getting access. That meant that companies needed a different way to make money online, hence the rise of data collection. Initially, starting out as a harmless tool to provide advertisers with the attention of relevant potential-customers. It has now evolved into a behemoth that not only provides the things we may like but also tries to shift our preferences ever so slightly. Doesn’t seem so bad, but these subtle nudges to shift our opinions slowly push us further and further down the extreme path we are on - which is proven by the increased polarization (shown in multiple studies [1] [2] [3] [4]) around the world.

This statement made at the end of The Great Hack further highlights that this negative opinion on data analytics is also due to some tactics of fear mongering and misrepresentation of information. Without any context, it seems like Donald Trump paid to win an election. Then you consider the fact that in total Hillary Clinton spent 1.4 Billion compared to Trump’s 957.6 Million on their respective campaigns. The main reason Trump spent more on online ads was that his fundraising had lagged behind Hillary Clinton, so he had missed out on the opportunity to spend on TV ads.

There are so many examples of data being used to make our lives better, but at the end of the day, data analytics is just a tool. In the hands of the right person, it could bring unprecedented benefits to society. If we go down the extreme path of fearing the tool, we have lots to lose. That being said, I still highly recommend everyone to find out what is happening with your data. Knowledge is power, and we can learn a lot about ourselves from the way our data is being used.

The Bright Side of Sharing Our Data
Share this