“We are working to ensure territorial integrity, national sovereignty, and freedom of our people. The kings of Nepal lost our territory, but today we republicans are restoring it.”

Announced by Pushpa Kamal Dahal Prachanda, the co-Chair of the Nepal Communist Party on June 13, 2020, amid loud applauses at the Pratinidhi Sabha (the Lower House of the Nepalese Parliament), the declaration comes at the occasion marking the passage of the Second Constitution Amendment Bill which ensures legitimacy to the updated political map of Nepal. It had been at the eye of a diplomatic storm for including Indian territory within the periphery of Nepalese borders.

The Indian territory of Limpyadhura, Kalapani, the strategically vital Lipulekh pass, all located in the Pithoragarh district of the Indian state of Uttarakhand have been shown as parts of Nepalese territory. The Indian Ministry of External Affairs has regarded the bill as an encroachment into the sovereignty of the Indian territory as they refer to it as an “artificial enlargement” in an official statement. The bill, which was passed by the approval of 258 members present and voting, out of the total strength of 275 members, has strained the otherwise good bilateral ties between India and Nepal. The upper house of the Nepalese Parliament, the National Assembly had been unanimous in its support for the bill, with all 57 members present voting in its favour on June 18, 2020. The die had been cast when the bill providing for the inclusion of Nepal’s new political map had been approved in its national emblem. The final move has sparked fierce criticism on a “sensitive issue”.

The origins of the row

It is interesting to note that this diplomatic uncertainty was birthed through a 200-year-old treaty, the Treaty of Sugauli, that had formally established the boundaries of Nepal. The treaty had been signed on December 2, 1815, between the East India Company and Rajguru Gararaj Mishra with Chandra Sekhar Upadhyaya in the aftermath of the Anglo-Nepalese War of 1814-16. The interpretation of the treaty has been one of the primary causes of the present conflict. According to the treaty, the Eastern side of the river Kali falls within Nepal’s territory while the Western bank lies in India. The trouble brews from a common misinterpretation as Nepal considers Limpiyadhura as the origin of river Kali, thereby forwarding the claim that Limpyadhura, Lipulekh and Kalapani belong to their dominion. The advocates of the Indian cause, on the other hand, state that the origin of river Kali is Kalapani, which is an area located within Indian borders. The two regions of Susta and Kalapani cover 40 km of the Indo-Nepal border. 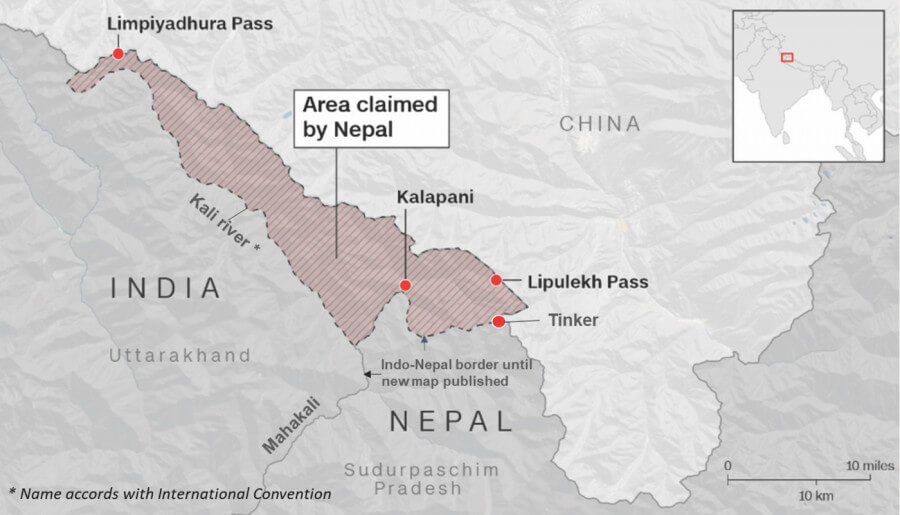 The cartographic dispute had earlier raised its ugly head, when on November 2, 2019, the Indian government had put up a new political map of the nation, depicting the reorganisation of Jammu and Kashmir, with a vivid depiction of the disputed Kalapani region exactly as it had been before. There had been allegations by the Nepalese government that in spite of twin reminders for restarting a foreign secretary-level dialogue mechanism between the two nations, India had not agreed to fix a date for the bilateral talks. Many quarters have regarded it as a fallout of the Nepalese Prime Minister KP Sharma Oli’s proximity to China. The Nepal government had expressed demands to publish their own new map which aimed at incorporating the disputed sites in their own fold. Oli had dismissed such claims on November 16 in the face of contrary claims put forward by Padma Aryal, the Nepalese cabinet minister for land and poverty alleviation who asserted that Nepal would soon come out with a new map.

Due to a shift in priorities of both governments in the face of health security challenges imposed by COVID-19, the matter had been erased from public memory. But it resurfaced with a May 8 tweet by the Indian Defence Minister Rajnath Singh. Singh had laid emphasis on his inauguration of the blacktop road to Lipulekh pass, which had been under construction for 8 years. The Nepalese government in Kathmandu claimed that 19 km of the said road extended to Lipulekh, which according to their claims had been a part of Nepalese territory. It was seen as an attempt on the part of India to make an illegitimate claim on a nation’s territory, a violation of its absolute sovereignty. Populist rhetoric amplified the notion. The Chief of the Indian Army staff, M M Naravane (who is also the honorary General of the Nepal Army) went on to say that the Nepalese protests were being conducted under the behest of “another country” primarily indicating China. Nepalese Defence Minister Ishwor Pokhrel replied to this saying that the comments had been an “insulting statement”, resulting out of ignorance of Nepal’s history, freedom and social characteristics. He further made an allusion to the sentiments of Nepali Gurkha army personnel, a majority of whom are engaged in the Indian Army.

In the Nepali Parliament, Oli had reiterated the intention to reclaim the Indian territory, referring to it as being under the ‘occupation’ of the latter. However, his derogatory jibes at the Indian national emblem, manifesting in his controversial remark wondering if India subscribed to the physical aspect of the emblem - the Lion Capital of Ashoka - “simhaev jayate’’ or “satyamev jayate” (truth alone prevails), led to a deepening of the diplomatic rife between the two otherwise conciliatory foreign policies pursued by the two nations. The issue had been in the priority list of the Nepalese Government ever since Oli’s second term in power began in 2018. New Delhi in spite of its repeated emphasis on the ‘Neighbourhood First’ policy had turned a blind eye. A dent in the mutual relationship between the two had begun to deepen since 2015 when Oli’s government had promulgated Nepal’s new Constitution, widely dubbed by India as flawed since it didn’t include the political aspirations of individuals from the Terai region - Madhesis and Tharus.

The border blockade by the Madhesis that followed had allegedly received “Indian support”, according to Oli’s government. It is believed in diplomatic circles that although no evidence of Chinese connection or support has been found in the formulation of the border dispute, Oli is confident of Chinese support in further provoking India. Many believe this stance of his is a result of the turmoil in Nepal’s domestic policy. Oli may be trying to outdo his friend-turned-foe, Pushpa Kumar Dahal Prachanda, creating a scenario that might jeopardise a smooth diplomatic exchange with India.

The need of the hour is to revive diplomatic channels between the two nations. Kalapani continues to be an important area of dispute due to the presence of an Indian military post present there. Kalapani has massive strategic importance to India as it shares a border on the North with the Tibet Autonomous Region of China, and Nepal in the East and South. It falls on the route to Mansarovar, a pilgrimage site in Tibet. It helps India in tracking Chinese movements in the region. The Lipulekh pass, on the other hand, had been an ancient route of trade and pilgrimage but had been temporarily closed following the Indo-China War of 1962. Options to ensure joint sovereignty can be taken as a way out, in times of such a major cartographic dispute. The idea of negotiation had been echoed in 1999, when the then Indian Prime Minister, I K Gujral had said “If Nepal can prove Kalapani belongs to it, we will give it up”. However, the task of locating the source of a boundary river, coupled with a watershed, remains a Herculean task.

Whose Land Is It Anyway?: Charting The Kalapani Dispute and its Implications on Indo-Nepal Relations
Share this